X Marks The Spot For Last Big Fete Before Christmas

The X-factor at last weekend’s Sagi Time fete was an early Sunday morning performance by Soca star Olatunji. The Trinidadian singer flew into Canada just hours before taking to the stage in Toronto to entertain a room filled with his fans.

With the holidays almost here, the annual Sagi Time (short for Sagitarius Time) had a near full house for the last big bash before Christmas. Held at the Eglington East Latvian Community the fete combined good food, Trinidadian and Canadian performers and a well used large dance floor. 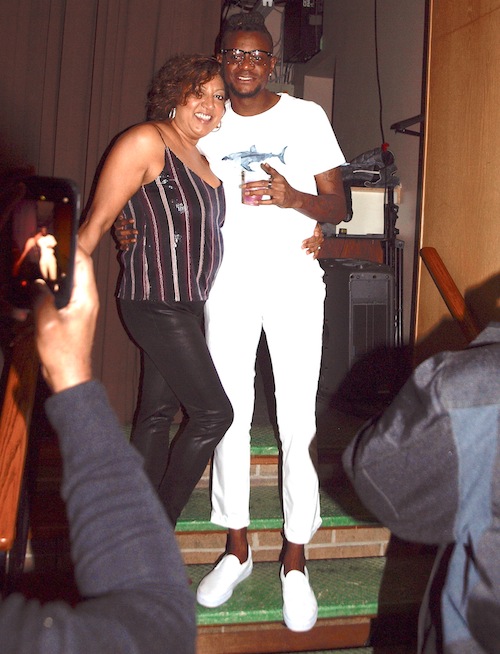 Olantunji (Edward Yearwood) earned global recognition when he won Trinidad's International Soca Monarch in 2015, after singing his blockbuster single "Ola” (which he sang at Sagi Time). In September he was a contestant on the UK X Factor and competed on the wildly popular televised show before being eliminated.

Sagi Time’s live music programme got a late start (or did this reporter arrive too early?), allowing many of the evening performers, including Olatunji, to lime with the paying customers while DJ’s supplied the music. Canada’s Soca Monarch, Connector (Joel Davis) , was particularly accommodating, posing for fun pictures with his fans in the lobby for over half an hour before getting down to some serious performing.

Mark Mosca, who three week’s ago, was the guest pannist at George Weston Theatre’s Etienne Charles jazz show opened Sagi Time with fellow pannist Andy Phillips. Connector followed, starting his show on the stage and then quickly moving onto the dance floor, finding one pretty woman after another to dance with and help him sing.

The Toronto based Moses Revolution with leader, Mose Lewis, paid tribute in song to three great Trini performers – Shadow, Byron Lee and Buju who have passed away. Olatunji followed the Revolution.

The next day Face Book was abuzz with videos and reports about Olatunji’s energetic. “The dynamic energy of the night came from Mr. Olatunji himself, what an entertainer!” posted one Facebook concertgoer. “If you didn't make it, well, you missed a chance to support our culture...which seems to be slowly dwindling away these days. Overall, for me it was a great night!”