Who is Truly "The Face" of MCAP and Who's In Charge? Easton Taylor-Farrell or still Reuben T Meade? (For RTM)

The Movement for Change & Prosperity Party (MCAP) is the best comedy show for these 2019 elections.

Each time MNI listens to MCAP's rhetoric, it is so clear that not a single thing has changed about this party; well, except for some new faces. The Br Anansi tales and stories type of politics that MCAP favours is in living and live colour for all who care to join in their show.

MCAP is a dishonest grouping. They have always been, and they continue to be so. Truth and MCAP in the same room makes for a major category 5 storm. They do not mix well.

Who though is in charge of MCAP? Is it "The Retired One" - Reuben T Meade? Or is it Hon Easton Taylor-Farrell?

MNI feels a sense of sadness for Hon Taylor-farrell. Truly nice guy. But this is politics Hon Easton, and you need to stamp your authority over your party, which you are failing to do.

Former Premier Reuben T Meade (RTM) is overshadowing you with his constant and blatant undermining of your Leadership. Where else have you seen a recently "retired" Leader of a Party being so adamant on being involved in an election campaign from the sidelines, projecting more authority than the current Leader of the Party that he just left. It's unheard of Hon Easton, and a disrespect to your Leadership of MCAP.

Hon Easton Sir, MCAP is now YOUR Party, but from all accounts, MNI observes you and your colleagues seeming to be holding on for dear life to Reuben's coattail, hoping that this fake aura of mystique RTM and his followers thinks he holds can take you and MCAP to the promised land of being in charge of the governance of Montserrat. It won't.

You recall Hon Easton, when Reuben called your Public Accounts Committee (PAC) enquiry into the Government Constructed House in Davy Hill a "woft". Do you know what a woft is Hon Member?

Publicly, via social media, RTM undermined your authority. What a public slap down that was of you, the man who is in charge of the party Reuben claims to be so still in support of.

RTM could have silently came to you Hon Easton, and said Brother Easton this is not an advisable route to pursue. But instead he came on Social Media and looked to publicly embarrass you as the Chairman and Lead person on the Public Accounts Committee.

What MNI finds most entertaining about this MCAP mess of a party - besides their blatant stranger to the truth complex - is the way in which they're both seeking to hold on to RTM, and at the same time trying to figure out a way to distinguish themselves from RTM.

Well MCAP should recognise that the Legacy of Reuben T Meade is the albatross around their necks.

MCAP without Reuben T Meade is a non-entity - a has been.

MCAP with Reuben T Meade behind the scenes and publicly via social media directing proceedings is a liability. For if Reuben insists on being the 10th candidate then he will be treated with all the trimmings of still being in the arena. See below what Editor of The Montserrat Reporter, Bennette Roach once penned about MCAP's messiah: 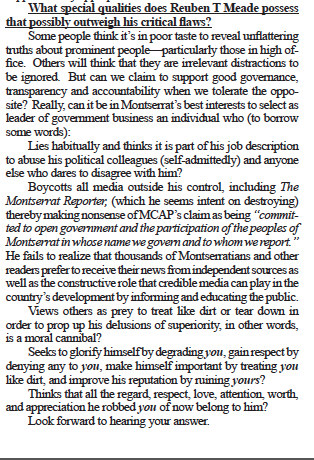 Hon Easton Taylor-Farrell, MNI told you before, and we will tell you again - you are being besieged by traitors inside your camp. Hon Joseph does not support RTM despite his pretence to do so. MNI only wishes he would publicly deny he has ever stated this to us. We challenged him twice to do so, and he has yet not come forward saying he never stated these things to MNI.

RTM clearly enjoys the fake love, so he in retirement and boredom perhaps, he continues to dine at the table of cheerleaders who only wish to use whatever pull they feel he may have to draw in votes. It's entertaining. I must admit. Thrilling to the tee. But come on RTM, retire in dignity Sir, and don't be played by people who are not truly believers in you.

Now on to another matter of MCAP dishonesty. Last Friday, I listened as MCAP Chairman Howe and Roslyn Cassell-Sealy attempted to gloss over many serious conversations on their ZJB Radio appearance during the MCAP hour.

There are many things to write about with this, but today MNI will focus on one thing where the strategy of MCAP is obviously to play this emotional fear driven type of politics in seeking to induce voters to elect them.

MCAP are using this fear-mongering and the same tried and tested politicking of telling voters that these last 5 years "are the worst it has ever been under any government in Montserrat."

But allow MNI to show you how MCAP used this same strategy previously.

In 2005, it was MCAP's Reuben T Meade -- while in Opposition -- who moved a vote of no confidence in the John Osborne Government for Osborne's failure over the economy after four years in power, according to RTM. In 2005 Meade accused the John Osborne led PLM team of "incompetence and the inability to provide the leadership needed to arrest the continuous decline in the economy of Montserrat."

Meade and his colleagues spoke of "the unbearable pressure that was brought upon the people of Montserrat through policies implemented by the PLM Government...." Those were RTM's own words.

MCAP's strategy is always to induce fear and stamp it down with dishonesty to win elections. Let us also pay attention to what Mrs. Roselyn Cassell-Sealy said back in 2005, as Opposition Leader then, in support of the Vote of No Confidence in the John Osborne/PLM government's handling of the economy in 2005, 14 years ago. This is significant for it is the same tactic Roslyn and MCAP are back with again in 2019.

This is what Mrs Roslyn Cassell-Sealy stated in 2005:

"But, Mr. Speaker, we are back at that place again and we are back at a place that has become a worse place than the place we were in when the Honourable Chedmond Browne brought that Vote of No Confidence . We are at a place", continued Mrs Sealy, "where too many people are unemployed. We are at a place, Mr. Speaker, where the economy is at a standstill. We are at a place where we, all of us, fear that there will be a further increase in crime because we can't see anywhere on the horizon where the situation, the economic situation, is going to get better any time soon."

The MCAP of old is the same MCAP of today. The same guard behind the scenes directing the flow. It is an oddity to me why any young aspiring politician would have joined this lot who despise seeing anyone but MCAP's own people thriving. It is an oddity furthermore why any young politician would be associated with this grouping who are so steeped in dishonesty and poli-tricks. 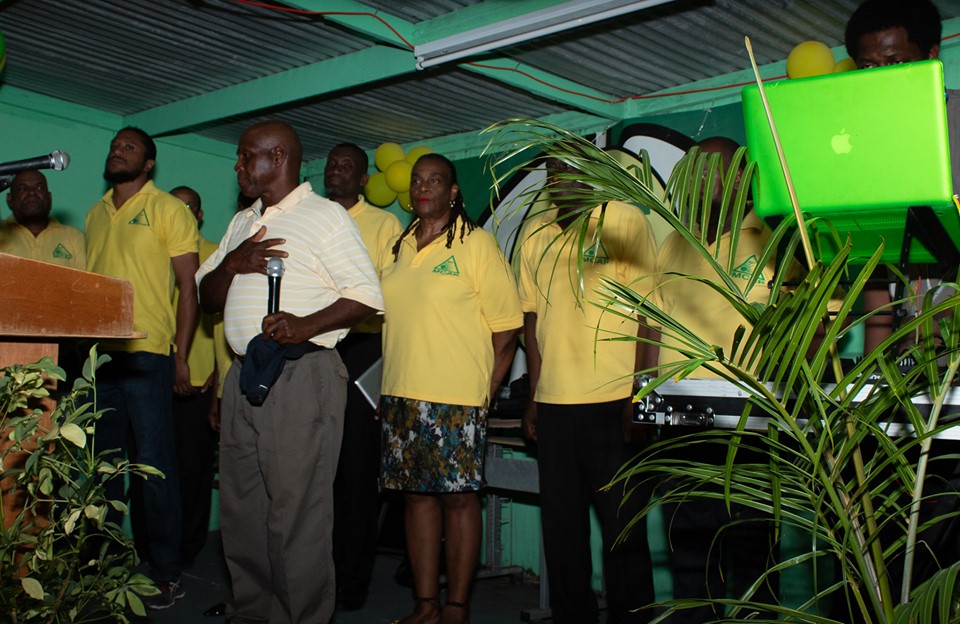 One man once had 5 jobs, while 5 men could not find one job under MCAP. That's the MCAP way. Nothing's changed.


Note: Jeevan A. Robinson is Editor-in-Chief of Marketing, News & Information Media - MNI Media. He can be reached at jeevan@mnialive.com