Uplifting The Spirit of March 17th, Today, in This 21st Century Dispensation for Montserrat

This year, March 17th, was for me, more so one of observation and reflection towards the March 17th, 1768 remembrance, and how we as a nation can move forward. For the agitation I began back in 2010/11, I most certainly do not lay claim to it, and neither should anyone else. For the greats before, in the likes of Chedmond Browne, Annie Dyer-Howe, Dr Sir Howard Fergus, and others have seen to it that March 17th be given its rightful placement via both social, cultural and economic recognition

For this year's March 17th festivities, there are several notable things MNI wishes to offer brief commentary towards:

1) Businesses Thrived Due to the Numbers
It continues to be amazing that private businesses, and also some government departments on Montserrat had the opportunity once again to earn much needed revenue and income from the patrons who were busy spending and enjoying the best that Montserrat has to offer. That was, and remains one of the greatest positives to take away from the just concluded activities. Well done to all those who today are counting and enjoying their profits. You all deserve this bounty and have worked hard for it.

This display of how well businesses can do further goes to illustrate that planning for economic sustainability without having a serious plan to increase the population is foolhardy at best.

Montserratians and our friends being on the island in their numbers was a wonderful treat both for family and friends coming together, but also for the economic returns it provides.

Focusing the Festivities
MNI Media, however, remains of the view that this very same economic abundance can be realised for Montserrat by seeking to focus these March 17th activities on the uniqueness of Montserrat's Culture and Heritage, with the central theme being around the March 17th Heroes.

As MNI sees the plethora of foreign acts coming into the country yearly for this time of year, it behooves one to wonder that if this time of year was being instead promoted with bands with an African theme such as what Reuben T Meade once did; mixed with local bands and talents being the main focus instead of these massive abundance of outside acts - would the numbers still flock home in droves and cry loudly how "Montserrat nice'?

Would the “Black Irish” promoters still champion that mentally defeatist and neo-colonial ideology, or would they champion a pro-Black, pro-nationalism, pro-Montserrat identity? Would it be so hard to promote our very own “Afro-Montserrat Festival” over a neo-colonial Black Irish Festival? MNI wonders with all honesty.

The March 17th time of year is indeed amazing to behold, but is this taking place at the relegation and disregard for the year-end December Festival?

Montserrat can have, and should have its many Festivals, but each one must offer a unique outlay, and not be used to replace and disrespect the other.

Economic benefit can be had, and abundantly so for all on Montserrat, but focus the Festivals to their true purposes is the major ask, and the major task.

2) Afro-Montserrat On The Rise
Deepest respect and mention must be given to all those, who instead or sporting Irish shamrocks, or depicting the clothing of former Irish oppressors over our Ancestors, they instead chose to wear both Montserrat fabric inspired prints, or African inspired attire.

In the image below we see Montserratian, Jahvon Tuitt, who gave MNI permission to showcase him being dressed as former slave on Montserrat Olaudah Equiano (1769), who gained his freedom. Jahvon is pictured with Makeda Hurst, who was portraying Equinano's wife Susannah Cullen- dressed in a very lovely afro-inspired print. 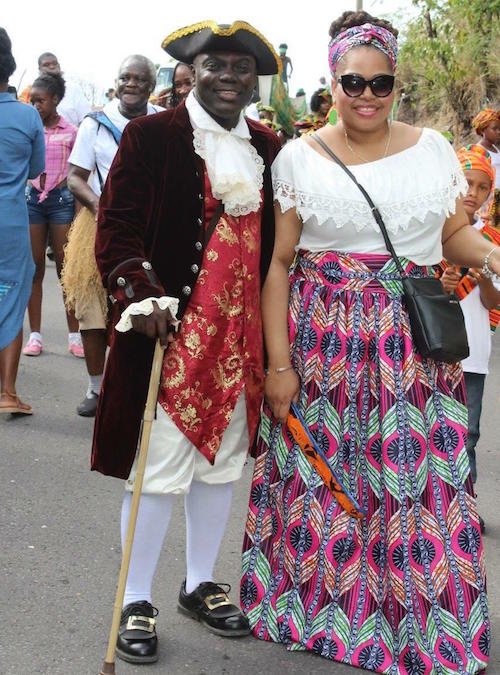 From the images depicted from Montserrat during this time of year, it would seem that the awakening of the focus towards a roots, culture, Black power and heritage mindset is gradually taking place. To those who lived their power in this regard, it was truly refreshing to see the many outfits in this regard.

3) MNI Proposes a Montserrat National Park Heroes Park
March 17th is fitting as that time of year for Nationalism and Montserrat pride to be a central theme.

In this vein MNI Media is of the view that it is high time that we have a Government who recognises the need for a Montserrat National Heroes Park. I am speaking of beyond the War Memorial depiction in Little Bay.

The Montserrat National Heroes Park can also be one where our National Flower – The Heliconia - is the major floral theme with other local flora and fauna. The park could also be complete with benches built and named individually after great men such as: Arrow, Willie Bramble, John A. Osborne, Marse Bob, Annie Dyer-Howe, Chedmond Browne, Nycum Riley, Cudjoe, Dr Sir Howard Fergus, Edgar Nkosi White, Jim Allen, Justice Esco Henry, Basil Morgan, Dr George Irish and other Montserrat greats who have contributed towards this island's struggle and quest for progress and development in truly meaningful ways.

Funding for the Park
This Montserrat National Heroes Park does not need to be a full government expense. MNI Media proposes that the park be crowd funded via Go Fund Me for instance, so that the Montserrat Diaspora can make their payments into this fund to acquire the space and build the various monuments, and benches, and have the requisite landscaping done to make this Park a true source of National Pride.

National Song
The words of the Montserrat National song should also be encased to withstand the elements, and placed within the National Park also, so that the Youth and all Montserratians, New Montserratians and our visitors can see on display further aspects that shows our national pride.

As an extension, MNI Media proposes that the Montserrat Cultural Centre (MCC) should truly begin to outwardly have that true Cultural representation. By this we mean that figures, busts or commissioned paintings of some of those key persons as we mentioned prior, who contributed to Montserrat's advance - that these be placed on the walls all over the MCC, and in key points inside the main hall - so that the building becomes more so a place where in its fullest, Montserrat’s history, our aspirations and our Nationalism are displayed on full account.

These ideas are achievable and can be done. Collectively.

Those 3 central themes as above are MNI Media's presentations towards how Montserratians, as a people, can truly begin to move the conversation forward, change the narrative and make March 17th not a Black Irish fest, but a truly representative Montserrat Cultural and Heritage Festival with the economic advantages still in focus and promoted to the fullest.

Let's be unapologetically pro Afro-Montserrat and depict it as so with no cause for excuses.

Note: Jeevan A. Robinson is Editor-in-Chief  and Head of Business Development at  Marketing, News and Information Media - MNI Media. He can be reached at jeevan@mnialive.com