UVC members will be among those attending the camp and at least one will serve as a camp leader for the participants, ages eight to 18. "This year UVC member Yadiska van Putten will get her first chance to work as a volleyball camp leader for younger participants," said Arrindell, herself a former volleyball player. The sports camp takes place in August just before the new school year.

Volleyball players and parents and guardians of children interested in playing volleyball can start registering for the camp at Tel. 520-1136, said Arrindell.

Yadiska, 17, is an example of the teenagers coached by the UVC over the years. "Yadiska trains with UVC three times a week. Once a month she receives intense training with UVC chief trainer Patricio Bridgewater. On top of that, she has recently started training with the youth volleyball selection," said Arrindell.

When asked about her other interests, Yadiska said, "I would like to work with educating toddlers because they’re at the stage of beginning to speak and understand." 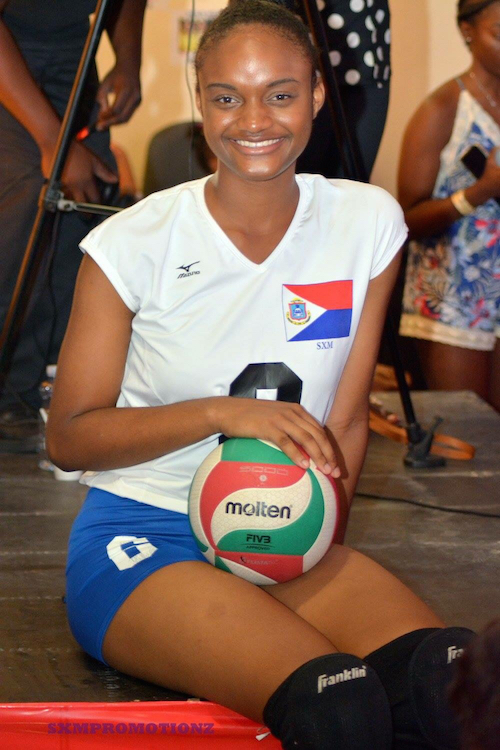 One of the highlights of the UVC training camp in August is that the club will host the visiting Colorado College women’s volleyball team. "For Yadiska, this will be a great opportunity because she intends to go to college in Denver and play volleyball for a college team," said Arrindell.

Do sports and education make a winning combination for young people? "Yadiska managed her accomplishments this year while maintaining her grades as a HAVO 4 student at MPC high school," said Dr. Arrindell, who is also an author and a leading St. Martin educator and linguist.

"Generally speaking the students and UVC, and if I may add, students in other sports organizations that are really trying hard to make a difference, are confirming the view that participation in sports helps students to become better representatives of their community both on and off the court or field," said the UVC coordinator.

"Over the two years as a member of UVC, Yadiska has exhibited all the values of UVC and the UVC motto that volleyball and education are a winning combination," said Dr. Arrindell.