Unequal Opportunity: Why More Blacks Are Dying from COVID-19

For decades, public health officials have sounded the alarm about the disproportionate health outcomes that plague communities of color, especially the African American community. Today, in the wake of the novel coronavirus (COVID-19), that fact can no longer be ignored. The virus has undeniably exposed and without a doubt confirmed the prevailing stereotype that dismisses African Americans as being a population that is noncompliant and that lacks interest in prioritizing their health.

Although there might be behaviors within the African American population that would validate these perceptions, there are bigger and more pressing issues at play. As we access health care services, we, as African Americans, have had to face and overcome uncontrollable underlying and invisible barriers. The very systems that were developed to preserve health and prevent diseases are oftentimes fraught with inequities when it comes to people of color.

We are up against systems that were not designed to support our health and well-being as a population. Frankly, what we are seeing today in terms of the disparities in morbidity and mortality due to the coronavirus is the manifestation of generations of systemic, institutional, and structural racism that African Americans have had to endure in accessing health care.

The recurring counterargument, which in my view wrongly shifts the blame from the system to the individual, often goes something like this: “Adults (regardless of race) are fully responsible for their health, and they should not wait until they are dying to access care for diseases that if caught at an earlier stage could have been prevented, cured, or treated.”

Although this is a logical and well-intentioned observation, there are historical and contextual factors that play into African Americans’ mindsets and behaviors when it comes to accessing health services. African Americans remember all too well atrocities such as the Tuskegee syphilis experiment, a 40-year study (originally slated to last for only six months). In the Tuskegee experiment, 600 African American men in Alabama were enrolled in one of America’s longest-running unethical human experiments.

During this period, penicillin – the known treatment to cure syphilis – was intentionally withheld from these men in an effort to observe the natural history of untreated syphilis. The men in the study did not know that they were not receiving the appropriate treatment and were instead led to believe that they had “bad blood” (a colloquial term in the black community that describes ailments such as anemia, tiredness, and syphilis). In exchange for their participation in the study, these men were given free medical care, free meals, and free burial insurance.

It may seem incomprehensible to the wider world that incidents like the Tuskegee experiment, which ended almost a half century ago, can still play a significant role in preventing many blacks in today’s society from trusting the medical system. But as unreal as it may seem, it’s true.

Coupled with distrust are the social and economic factors that further compound and increase the risks that make blacks more susceptible to chronic diseases. And when blacks do seek treatment, the diagnosis and prognosis are usually more severe than for their white counterparts.

What has been evident throughout the COVID-19 pandemic is that individuals with pre-existing health conditions are more susceptible to contracting and dying from the disease. With this fact confirmed, it was only a matter of time until we came face to face with what has been tearing at the seams of the health care system and creating health disparities in black America. As the trend began to emerge, an early graph (right) from Statista showed the rate of death among African Americans in four states relative to the number of African Americans residing in that state. To date, the statistics have poured in from other states and territories, and the impact on the black community has been congruent to earlier reports. 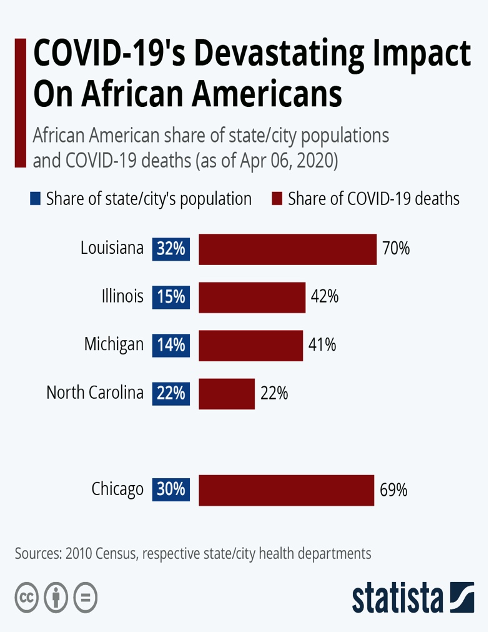 There’s no doubt that this pandemic has devastated the entire world and its economies. The toll it has taken on humanity will be felt for years to come. However, government and society at large must also take a hard look at the impact COVID-19 has had on the African American community and create a space for a thorough postmortem of the health care system on the national, state and local levels. Only in this way can we identify and better understand which disparities can be narrowed.

Most importantly, COVID-19 offers a clarion call for us as African American to understand what it truly means to be healthy in America and what we as a people and as individuals need to do to restore and maintain our health. This is of utmost importance, because if history has taught us one thing, it’s that there will be other pandemics. The question is this: would we as African Americans be ready and able to weather the storm? 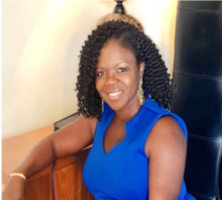 About the author: Vanessa Ingrid Farrell is a best-selling author and the CEO and founder of Vanessa Ingrid Health and Wellness Coaching, LLC. We help busy women, particularly those in leadership roles, unapologetically prioritize and preserve their heart health without sacrificing career and the joys of everyday.