Tribute To a Good Man and a Wonderful Priest, Father Larry Finnegan

The Montserrat community is remembering with affection Catholic priest Father Larry Finnegan, who died peacefully in his home country of Ireland on Sunday May 31st at the age of 78.

Father Larry lived and ministered on Montserrat for seven years, from 1993 to 2000, and touched the hearts of the Catholic community and many others. He experienced the height of the volcanic activity, which started in 1995, prompting evacuations from the capital Plymouth, the South and the East of the island, and in April1996 the people from those areas relocated northwards for the final time, never to go back to their homes. 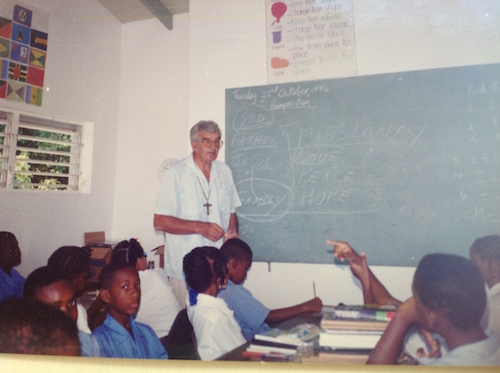 Many were housed in churches, including the St Martin de Porres Catholic church in Salem, the only remaining accessible Catholic church. (The other two Catholic churches in Plymouth and the South were later destroyed by the volcano).

Although offered accommodation, Father Larry chose to shelter and live in the church with the 70 or 80 evacuees, sharing the cramped conditions and all the inconveniences of shelter life. He was too tall for the cots that were in use, so he used a chair at the end of his cot to make it longer.

More than once he was able to mediate in the inevitable disputes that cropped up between relocated residents, and was a calming influence in the shelter. He also took the children to the beach once or twice a week to give the parents a rest, or he would stay with the children in the shelter so that the parents could go out for a while.

Father Larry was instrumental in the purchase of a house in the safe area of Woodlands to accommodate the relocated St Augustine Catholic school. Just a year or two previously, the school had moved into its brand new 3 storey school building in Plymouth, which is now totally destroyed by the volcano.

Since St Martin’s Church was occupied as a shelter, the relocated school building doubled as a church, with services taking place on the front veranda of the house, the veranda also serving as an extra classroom since space in the house was limited. Since those early days, the house has been enlarged with additional buildings and is now the permanent home of the school, thanks to Father Larry’s vision.

Present day Catholic priest for the island, Father George Agger, describes Father Larry as a man of strong and deep faith, simple, practical and down to earth. He visited him recently in Ireland and says that he accepted his illness and was very much prepared for death. He was not in pain and was at peace with himself and his Illness and with God. He ate pizza with enthusiasm when Father George visited! 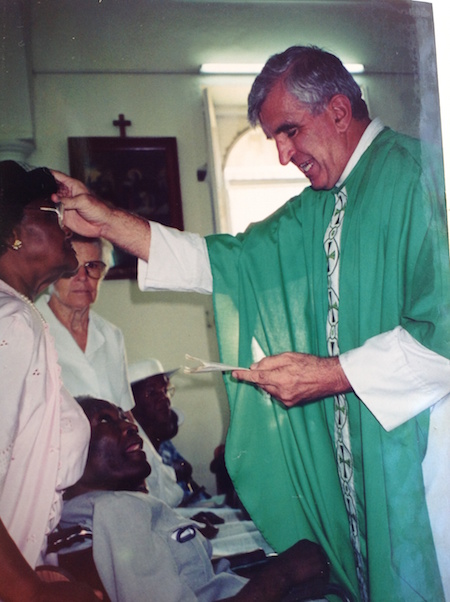 Coincidentally with Montserrat’s connection to St Patrick’s Day, Father Larry was born in Ireland on St Patrick’s Day 1937. He became a member of the Divine Word Missionary society, like Father George and other priests who have served on Montserrat. He was ordained in Chicago in 1968.

He was awarded the Montserrat Badge of Honour, of which he was very proud, and later in 2000 he was awarded an MBE, a special honorary award since he was not a Commonwealth citizen. After leaving Montserrat in 2000 he was transferred to St Kitts and then to Virgin Gorda, where he served for a few years before returning to Ireland.

Father George points out that Father Larry would sometimes visit the Montserratians in the UK, and they would gather for mass and social meetings when he visited. Many of the diaspora remained in touch with him, keeping up his close connection with Montserrat.

Although he left Montserrat so many years ago Father Larry is still remembered with affection by many in Montserrat including those from other churches. He was well loved and admired, and was instrumental in so many people’s lives. He will be greatly missed.