There is a school of thought that says that the Caribbean island of Montserrat is failing. Some factions within that school of thought have seen it fitting to misrepresent the hole Montserrat finds itself in without fully placing the conversation in proper context and reference.

On Wednesday, January 31st, 2018 the people of Montserrat will welcome a new Governor in the person of Mr Andrew Pearce OBE. The island’s citizens will hope that his tenure on Montserrat will yield much by way of development delivery.

Recently departed Governor Elizabeth Carriere was the brunt of much ridicule during her time on island. Whilst I will state here that I am not one for applauding vestiges of colonialism in what should be a modern 21st century development delivery relationship, I would hasten to add also that much of the conversation around Governor Carriere’s time on island, and also the present state of Montserrat has been seemingly an engagement in seeking to re-write political history without a full examination of the facts.

We will present the facts…

The actions taken by Governor Carriere, and the powers so bestowed upon her office were actually afforded, and legally mandated under the 2010 Constitution Order of Montserrat. This Constitution Order, and many aspects of it that had to do with the Governor’s powers, amongst other things were strongly opposed by MNI Media and many others, back in 2010 when it was being forced upon Montserrat by former Premier Reuben T Meade, and the then ruling MCAP Administration.

Then, following on from that rush to bring the 2010 Constitution Order into law on Montserrat, Reuben T Meade then took the single-handed decision when he travelled to Quito, Ecuador to the 24th Regional Pacific Seminar on Decolonization and decided to commit Montserrat's future, without any consultation whatsoever with the people of Montserrat, to the hands of British rule indefinitely, by stating that Montserrat no longer wished to be on the United Nations Decolonisation Committee’s List.

Former Premier Meade whilst in Ecuador shocked a vast majority of Montserratians by stating:

“The conclusion therefore is that the UK overseas territory of Montserrat has by choice determined that they wish to continue being part of the UK. We no longer see ourselves as being a colonized people on the basis of the seven elements of the 947th UN Plenary of 14 December, 1960. We see ourselves as being part of the UK family by choice. It is therefore my recommendation that this UN Decolonisation committee remove Montserrat from their list of non self-governing countries, within their Decolonisation discussions. I am also certain that the UK supports our stance."

Meade neither consulted with Montserrat’s population, nor held a single public meeting to ascertain the public’s mood before taking such a decision to commit Montserrat’s future to colonial rule indefinitely. Unless of course these meetings were secretly held.

In a large part, it was that decision by Reuben T Meade that began the colonial stranglehold over Montserrat. Meade recommended that the Special Committee on Decolonization should remove Montserrat from its decolonization discussions.

During the 71st session of the United Nations General Assembly in 6th December 2016, the Assembly adopted a Resolution [on the report of the Special Political and Decolonization Committee (Fourth Committee) (A/71/502)] 71/114 - where within the document it stated that The General Assembly, Having considered the question of Montserrat…..

Recognizing that the specific characteristics and the aspirations of the people of Montserrat require flexible, practical and innovative approaches to the options for self-determination, without any prejudice to territorial size, geographical location, size of population or natural resources..

Both these actions by Meade of making an almost hasty choice to ratify the 2010 Constitution Order in the Montserrat Legislature, then heading to Quito Ecuador and handing the country back over to the British were both done in an attempt to find favour with the UK Government in the hope that they would have released development aid monies to his then failing MCAP Administration. It never happened.

Romeo Helped Meade
Current Premier Romeo has to equally be put to task, as it was shocking that for a man who was also stridently against the ratifying of the 2010 Constitution Order due to the very same reasons cited above of too much handing back of colonial power to Britain – he then came into office and essentially followed through and completed what Meade started, in giving more control of Montserrat to the British. 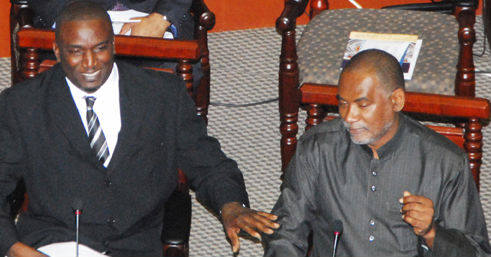 Therefore, it stands to reason that when the people of Montserrat witnessed former Governor Carriere acting in the manner she did, and Romeo ceding control of the country over to her – yes – there is no mistaking that that was a showing of weak leadership and ill-advised decision making not in the best interest of Montserrat by Romeo. However, also the Governor was acting within the powers given to her under the 2010 Constitution Order by Reuben T Meade, further entrenched without any resistance by Premier Romeo when he came to office.

MNI Media had previously shown that when Carriere came to the island, and she made her initial moves to take power away from Romeo and more towards her office, she indicated to a room of Civil Servants that she can do what she was doing, “because it is in YOUR Constitution, that YOU agreed to.”

Romeo now has found himself in a quandary; one mainly of his own making as he essentially took a Reuben T Meade mandate, and ratified it as he perhaps thought that the new relationship he sought with Britain meant giving over so much of his authority as Leader to the Governor’s Office.

This pathway laid by Reuben T Meade, and the subsequent inaction of Romeo have quite possibly been the foundation stones as to why Montserrat is in its present mess. It is this pathway that heralded the TC’s and the many other vexed debates to do with current national development.

The problems that Montserrat now face with DFID are not new problems, as the records will indicate that even Meade was stonewalled by DFID in development aid. It was EU monies he mainly used to get some work going on Montserrat.

However, in a question sent to DFID in late 2017 following the passage of the Hurricanes Irma and Maria through the region, as to their development plans for Montserrat’s sustainable future, it was clear that DFID will not any time soon be giving Montserrat what it needs for its proper development.

It was pointed out to DFID that Montserrat had made little progress in regeneration since the volcano crisis, and that the reason for this was that the aid provided to the island was tagged under Overseas Development - which by the way is restricted to poverty relief. It was further questioned of them why Montserrat as a British Territory was receiving Overseas Aid, rather than being supported as a part of the United Kingdom, like other territories’ relationship with their “Mother Countries”

The response received was two-fold, but the key part to make you aware of is when the DFID official in London who responded stated:

‘DFID Financial Aid aims to meet the financing gap for recurrent spend identified by the Government of Montserrat between domestic revenues and anticipated expenditure. These funds contribute towards the provision of basic services on island and the operations and activities of Montserrat’s Disaster Management Coordination Agency (DMCA) who lead on all disaster preparedness and response on island. Through Financial Aid, DFID also supports the Police, Office of the Premier, Office of the Deputy Governor and the Ministry of Agriculture – all of whom are engaged with disaster mitigation and emergency response. In addition DFID has provided infrastructure funds for the upkeep and maintenance of the islands hurricane shelters.”

Both Romeo and Meade owe a debt of repentance to Montserrat for what they have subjected the island to; for history will show that Meade’s 2010 Constitution Order was a rushed act and was not in Montserrat’s best interest. History will also show that Romeo did not show any leadership to stand up to the British, and not give his authority over to the Governor in the way that he has.

Now the people of Montserrat have to realise what has been done to the country by past and present political leaders and figure out a way forward, without being soley reliant on DFID and the United Kingdom.


Jeevan A. Robinson is Editor-in-Chief and Head of Business Development of Marketing, News & Information Media - MNI Media. He can be reached at jeevan@mnialive.com