Next time that Calypso singer David Rudder appears on stage, the audience should give him his new dues by shouting out as loud as possible Cheers  To The Honourable King David! Earlier this month the Trinidadian Canadian performer received the Order of The Caribbean Community (OCC).  The award bestows styling The Honourable upon Rudder’s name!

Rudder, who is often referred as King David,  was in Port of Spain on the 10th of August to receive the prestigious award at the Diplomatic Centre in St, Ann’s.

According to an information bulletin of Trinidad and Tobago’s Ministry of Foreign and CARICOM Affairs the decision to award 69-year old Rudder the OCC was made  back in July at the annual  Caribbean Community and Common Market  (CARICOM) Heads of Government Conference in Suriname. The Honourable David Rudder was unable to attend that event and so the presentation ceremony was moved to T&T on August 10th 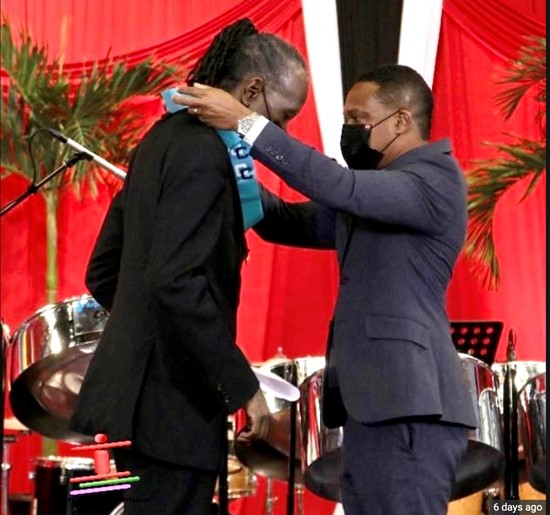 Allison Drayton, Assistant Secretary General of Human and Social Development of the Caribbean Community praised Mr. Rudder for raising the spirits of the region. She noted that everyone felt Trini to the Bone as a result of his music.

Senator the Honourable Dr. Amery Browne, Minister of Foreign and CARICOM Affairs, presented Mr. Rudder with the award, and delivered from the podium a detailed Citation that praised his stellar contribution as a cultural icon to the social fabric of Trinidad and Tobago and the Caribbean as a whole. The Minister lauded the wide span and longevity of Mr. Rudder’s work,  and included specific reflections on the profound impact of Mr. Rudder’s seminal work in 1986 when his album “The Hammer” broke into the consciousness of Trinidad and Tobago and the world. Dr. Browne’s presentation also highlighted that the clarion call of Mr. Rudder to Rally Round the West Indies remains cemented as an emotional anthem for West Indies cricket to this day.

In accepting the award, the new Honourable “King” David Michael Rudder spoke out to the youth of the Caribbean and “admonished young people to continue to learn and never to give up.” He also posted his thanks on his Facebook page.

The Order of the Caribbean Community ia the highest award in the region and can only be held by 15 living awardees at any time. Prior to 2022, the O.C.C. had not been conferred in 10 years.  Also receiving the OCC this summer were Irwin LaRocque, former Secretary-General of the Caribbean Community; Sir Vivian Richards, cricketer; and Dame Billie Miller, former Deputy Prime Minister of Barbados.

The Order of the Caribbean Community represents the highest award in the region and is bestowed with great pride and joy. The award can only be held by 15 living awardees at any time. Prior to 2022, the O.C.C. had not been conferred in 10 years.