On Thursday, 20 October, the first day of Montserrat’s 2022 Cruise Ship Season, the Montserrat National Museum launched a new Exhibition called: ‘Take The Shackles Off My Feet So I Can Dance - The Journey From Equiano to the Mighty Arrow’.

The Exhibition celebrates the people of Montserrat who, after almost four centuries of enslavement, oppression, and repression, have found ways to express their feelings through literature, music, and dance. The Exhibition showcases unseen Arrow photographs and memorabilia, whilst taking the audience on a journey through his lifestyle, passions, influences, and enduring legacy. Also on display is the influence of early settlers - Tainos/Kalinagos, Europeans and Africans on Montserrat’s culture, and some results of the local Hidden Histories Research Project highlighting those influences on our use of medicinal plants.

Olaudah Equiano
Olaudah Equiano, also known as Gustavus Vassa, an African slave who bought his freedom in Montserrat in 1766, is famous for writings that describe his journey and his observations as a young slave from Africa and a privileged free citizen who lived in England. As a Sailor, he travelled extensively in the Caribbean, the United States, and Europe, and documented his life story in an autobiography, entitled ‘An Interesting Narrative’. His testimonies in his writings were instrumental in the Abolition Movement in England.

Alphonsus, ‘the Mighty Arrow’ Cassell
Alphonsus, ‘the Mighty Arrow’ Cassell, a Calypsonian/Soca Maestro of international repute, the famous co-creator and electric performer of his global hit song, "Hot, Hot, Hot", was born on Montserrat in 1949, some 204 years after Equiano. His pulsating calypso music, with rich African Rhythms invites us to "Dance". He used his lyrics as social commentary, highlighting the ills of his day and famously advised Montserratians to "Hold on to your property and will it to your children'' in response to the real estate movement of the 1960s when huge tracts of former plantation lands in Montserrat were rapidly sold to North Americans. Throughout his career he produced albums which encourage listeners to forget their shackles and dance away feelings of oppression, stagnation, and victimisation. On Wednesday 16 March 2016, he was posthumously awarded the National Hero of Montserrat.

Sawandi Cassell, a representative of the Alphonsus Cassell Foundation, said: “It was an absolute pleasure working with the team from the Montserrat National Trust, on an Exhibition that commemorates the life and legacy of my father, the ‘Mighty Arrow’. The Alphonsus Cassell Foundations looks forward to developing a lasting relationship with the Trust.”

Sarita Francis, Executive Director of the Montserrat National Trust, said: ‘We can use the knowledge of the past to create opportunities for the present and impact future generations. This Exhibition offers residents and visitors a unique opportunity to explore Montserrat’s indigenous and colonial history, our modern culture and heritage, as well as exclusive access to pieces from the Alphonsus Cassell Foundation’s private collection of outfits, awards, discography, live performances and more.”

The photographs used in the Arrow Exhibition are with the kind permission of the Alphonsus Cassell Foundation. 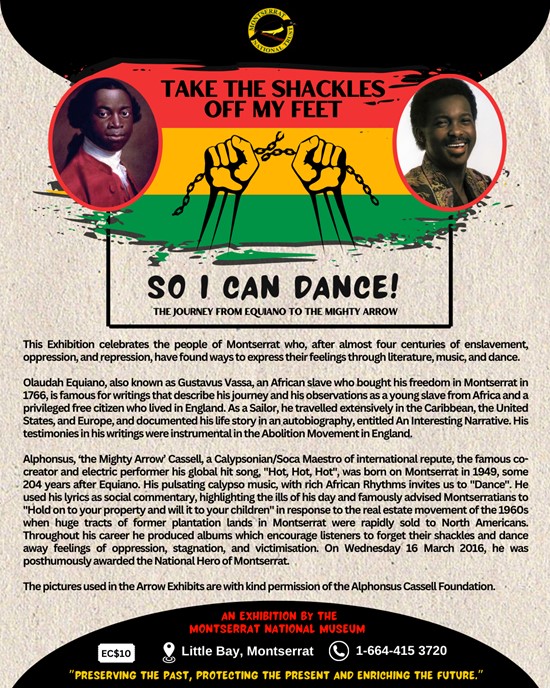