On the Caribbean island of Montserrat, the goal to be 100% renewable energy efficient by 2020 is moving ahead.

This effort is being spearheaded by The Minister with responsibility for Energy, Hon Paul J. Lewis, and his team at the Ministry of Communications, Works, Energy and Labour (MCWEL), with funding partners Department for International Development (DFID), also fully onboard.

Honourable Minister Lewis' work on ensuring that Montserrat has the right framework in place to capitalise on renewable energy production on Montserrat continues to the the favour of International and Regional renewable energy organisations who have hailed his work as a pilot example to be adapted by other developing states with similar aims and ambitions.

So much so, that Minister Lewis was recently invited to the Cayman Islands to the just concluded 2017 Caribbean Transitional Energy Conference (CTEC), where he was a participating member in a specially constructed panel to share his views and experiences around the topic "Islands and a Collaborative Approach to Energy Transition" 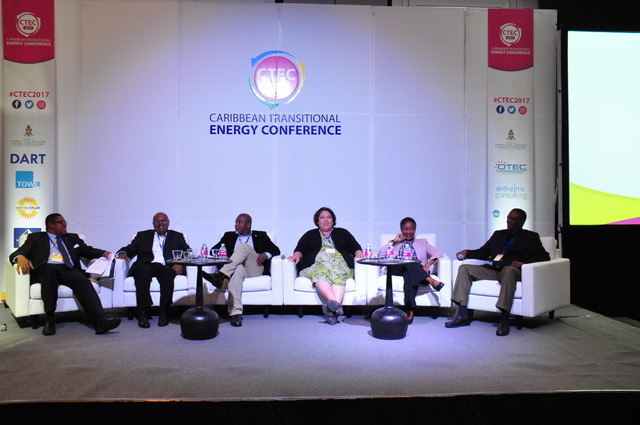 The panel discussion which was the central theme of Day Two, on which Hon Lewis sat, aimed specifically to explore the key steps for Caribbean islands to build leadership teams, and identify the partners that will help make their energy transition possible.

A total of 6 individuals, to include Hon Lewis, sat on the panel sharing their ideas. Hon Lewis' presence particularly, was requested by CTEC as the organisers were keen for his efforts of pushing renewables on Montserrat to be shared with the attendees. 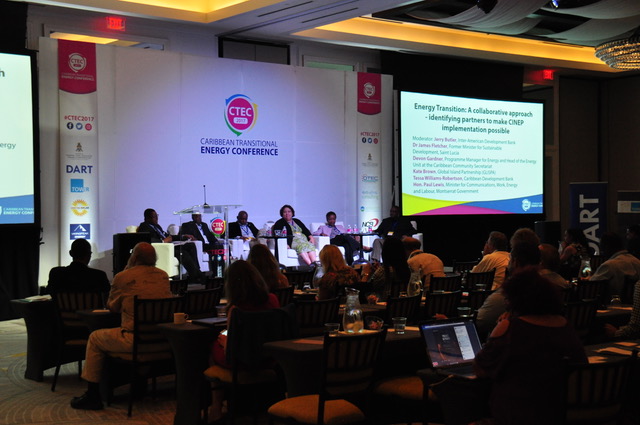 On Montserrat itself, the works of Hon Lewis in the renewable space continues.

Geothermal Energy is still being pursued with Well 3 drilling to recommence after a temporary operational halt in the drilling process. The full drilling works for Well 3 at the base of St George's Hill on the island, is being funded and managed by Montserrat's development partners, The Department for International Development (DFID).

The other aspect of bringing renewable energy into reality on Montserrat - A Solar Energy 1 Megawatt solar photovoltaic (PV) and battery project - is also showing great progress with a Request for Qualifications (RFQ) released into the international marketplace on March 24, 2017. The RFQ was for interested parties to qualify for the Engineering, Procurement and Construction for a 1 megawatt (MW) solar photovoltaic (PV) and battery project.

What renewable energy will provide for Montserrat is an additional energy source into the National Grid to improve reliability, and also assist in transforming the business development prospects for the island.

The tender for the 1 megawatt (MW) solar photovoltaic (PV) and battery project represents the first phase of two solar project phases on Montserrat.

The first phase will account for 250 kilowatts (kW) of solar capacity. Upon completion, the first solar project will generate 11% of the current peak load or maximum electric power needed.

Then the second phase will begin in early 2018, and consist of an additional 750kW of solar and associated battery storage.

See below the full List of Achievements thus far for 2017 under the Solar Energy Project, as the push for Renewable Energy is moving ahead on Montserrat:

4. A total of 17 respondents supplied information as per the published EPC RFI by the submission deadline of February 27th 2017.

7. The drafting and review of the EPC RFP documents ongoing.

9. Two (2) Full Project Team meetings took place within this quarter involving (MCWL, MUL, Stantec & Carbon War Room). The meetings took place January 6th and March 24th 2017. In addition both the GoM and Stantec Project Managers continue to have their weekly status meetings, in addition to other schedule meetings to deal with managing and advancing this solar photovoltaic (PV) and battery project on Montserrat.

Very soon Solar Power will be a reality on Montserrat as envisioned and championed by Honourable Paul J. Lewis