Statement; Government of Montserrat Responds to Fuel Station Owners Regarding Their Profitability Concerns

The following press statement was issued today in light of the current impasse between fuel station owners on Montserrat and the Government of Montserrat.

Fuel station owners have complained and made representations to the Government that there is a lack of profitability for their businesses; selling fuel to consumers under the current arrangement on Montserrat.

A recent post by John Osborne who owns the Osborne Service station (pictured) laid out some of the concerns as shown below: 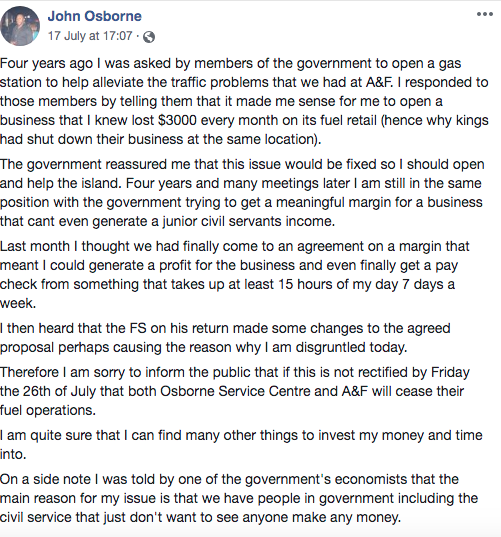 See below GoM's response as below:

The Government of Montserrat (GoM) over the course of several years has been approached by both Fuel Stations and their various owners about their limited profitability on the sale of fuel. In an effort to properly evaluate the situation on the fuel costs and the operation of the stations, two studies were carried out on the profitability of the Stations, and the storage and measurement of their products in 2014 and 2018 respectively.

The first study found that both A&F and at the time King’s Service Station were both making profits, albeit small profits based on the information provided; with A&F being in a better position to continue for the foreseeable future. The consultant who undertook the study had very limited and for the most part outdated financial statements to work with. This came out in the recommendations of the study where both firms were strongly encouraged to keep proper accounting records and produce yearly audited financial statements.

Government of Montserrat more recently received a request from the fuel retailers requesting:-

In an environment of fluctuating fuel prices, this increase was approved with the clear intention of trying to balance the well-being of both businesses and of the residents of Montserrat. The approved increase now places Montserrat retailers’ margin of 88 cents for diesel, among the highest when compared to St. Lucia, Dominica, St. Kitts/Nevis and St. Vincent & the Grenadines’ 2018 margins of 91 cents, 65 cents, $1.00 and $0.61 respectively.  The regional comparison is fairly similar for gasoline.

In the past month, Government of Montserrat, further approved a reduction in the rate of company taxes to 5% for the retailers for a five-year period, and has committed to a review of the calculator for determining fuel prices.

The Government of Montserrat will continue to do its best and meet with the relevant stakeholders to ensure reasonable fuel charges for all.