Whether you’re crazy for heavy metal or more of a pop music princess, new data released by lastminute.com has revealed the ultimate destination for your musical taste. The online travel provider has calculated the most frequently-visited cities by bands and soloists across the world so that you know where to travel to catch your favourite music.

The most popular genres throughout Europe

A total of 2,424 musical events are set to take place in Europe this year. From pop diva Christina Aguilera to alternative rock band Kaiser Chiefs– the musical artists of the decade have got you covered in 2020. Fussy with music? lastminute.com new research tells you where you should be holidaying this year to catch your favourite genre in concert.

Ranked by the total number of events, the study reveals that Las Vegas is the world’s music capital. With more than 310 events a year, Sin City claims the crown as the best city for music with names such as Lady Gaga, Sting and Aerosmith set to play there this year.

Looking for a boogie abroad? These are the cities where you’re most likely to stumble across a music event on your travels: 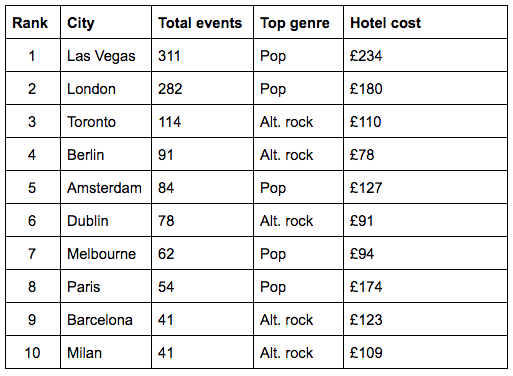 Destination hotspots for each genre

Only interested in exploring the countries with the same music taste as you? The study also worked out which individual cities are the leaders for each genre. By calculating the total number of events and comparing this to the local population, the findings reveal the countries that come out on top.

The USA dominates across countries and takes the crown as the home of 5 genres: classical, country, electronic, jazz/blues, and hip-hop. These are the cities that each genre can call home: