VANCOUVER, CANNES (May 13, 2022) – IndustryWorks Studios announced today that the studio will present the action-packed and relentless film Bullet Proof to the foreign market this year at the world-renowned Marche du Film in Cannes, France. Grindstone Entertainment Group, a Lionsgate company, will distribute the film in the U.S. and Canada this summer.

The talented ensemble cast features breakout performances from Lina Lecompte (“Charmed,” and Monster High), Janvier Katabarwa (‘Deadpool 2, Cold Pursuit) as the deadly character The Frenchman, and a lead performance by James C. Clayton as a cantankerous criminal mind who finds himself with a big bag of money and surprisingly with extra deliverable goods. 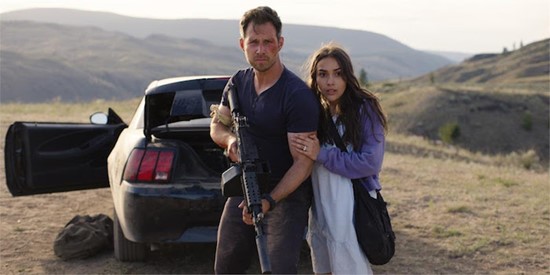 In Bullet Proof, a thief who only looks out for number one pulls off the robbery of a lifetime when he robs the psychotic drug lord Temple. The plan goes off without a hitch until the thief discovers a stowaway in his getaway car: Temple’s wife, Mia. With Temple and his top hitman, the deadly and mysterious hitman The Frenchman, in hot pursuit, and torn between making a quick getaway or taking a risky detour to help Mia escape her husband’s abusive grasp, the thief finds the only way to get out alive is to drive.

“Bullet Proof has all the elements of a classic action movie and is sure to keep audiences at the edge of their seats,” said Evan Tylor, CEO of IndustryWorks Studios.

“When Caterina and Evan screened Bullet Proof for me, I was absolutely knocked out,” said Stan Wertlieb, Partner of Grindstone Entertainment Group. “With high octane, kickass action, Vinnie Jones delivers a classic evil performance. And James C. Clayton shows he has the chops as both an action star and director – he’ s a fantastic new presence on the scene.”.”

James C. Clayton, who directs and stars in the movie, said, “With Bullet Proof, I wanted to deliver a relentless, thrilling joy ride. And I could not have been more excited than to work with the great Vinnie Jones, who makes Temple even more terrifying than I’d imagined on the page. It’s so great to know that Grindstone will be bringing this movie to action audiences across the country this summer.”

IndustryWorks Studios (“IWS”) is a feature film and tv production and distribution company under the direction of CEO Evan Tylor. He has successfully developed, produced, financed and distributed feature films, MOW’s and Original Series most notably Van Helsing for Netflix. As President & CEO Evan and the IndustryWorks label have been delivering high quality production and introducing emerging new talent consistently to audiences worldwide since the company’s inception in 2005. The Company develops, finances, produces and distributes Feature Films, MOW’s, Mini-Series and TV series.

IndustryWorks Studios continues to add to its vast growing catalog of films and series and remains one of the most active production and worldwide distribution companies in Canada.

Original content titles include feature film ‘Ripper’ (licensed to Lionsgate Films), ‘The Operative’, ‘Confessions of a Sociopathic Social Climber’ starring Jennifer Love Hewitt, produced for Bravo’s Oxygen Network, ‘Walk All Over Me’ starring Leelee Sobieski and Tricia Helfer and sold to The Weinstein Company, the critically acclaimed and controversial horror film ‘American Mary’ produced and sold to Universal Pictures, ‘Back to the Sea’, ‘Wrecker’, ‘Selfie From Hell’ (based on the YouTube viral sensation of the same name) and ‘AMI’ tech-horror film licensed to Netflix.