Air shows have long been something to capture the hearts and attention of Americans, from the very young to the young at heart. This October 1 -2, world-class aviation performers including Bill Stein, The Chuters, Kirby Chambliss and the U.S. Navy Blue Angels take to the skies above Carson Valley, Nevada, performing wild stunts, elegant formations and twists and turns for the crowds below. 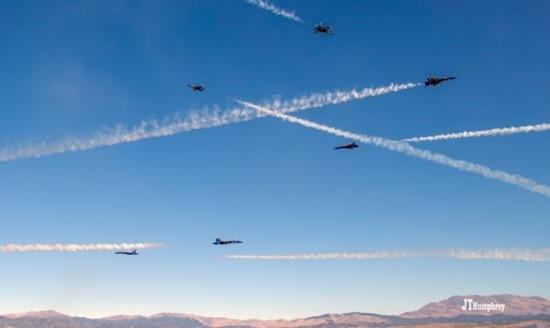 Aviation Roundup is a family-friendly event produced by Douglas County and hosted at the Minden-Tahoe Airport in Minden, Nevada.  The bi-annual event features some of the world’s best-known airshow performers and military jet demonstration teams as well as local and regional industry vendors exhibiting the newest innovations and technologies available to the aviation industry. Tickets to the 2022 Aviation Roundup go on sale May 1, 2022.

The 2022 Aviation Roundup performer list includes more than nine acts or groups over the two-day event. Confirmed for 2022 are the U.S. Navy Blue Angels, performing with seven of their F/A-18 Super Hornet jets along with “Fat Albert,” the Blue Angels’ C-130J Super Hercules transport jet.

Additional performers include Bill Stein, an aerobatic pilot with more than 5,000 hours of aerobatic and formation flight under his wing. The Chuters are a Veteran-centric parachute demonstration team providing patriotic-themed precision aerial parachute demonstrations across the globe. Greg Koontz and the Alabama Boys have been performing in airshows since 1974. Koontz began his career with Col. Moser's Flying Circus and learned his trademark maneuvers from the best in the business. Kirby Chambliss is a member of the U.S. National Aerobatic Team and holds 13 medals in world competition. Matt Younkin brings his Beech 18 with likely the most unusual performance act on the airshow circuit today. The Mini Jet Team brings their SubSonex Jet, only 500 pounds but with speeds up to 300 mph. The Super Salto Sailplane is a military-grade 250 pound thrust jet engine that self-launches and performs both a classic sailplane aerial ballet and low-level jet aerobatics.

The Erickson Aircraft Collection proudly displays a vintage aircraft collection started by Jack Erickson in 1983. The organization will also offer flights on these historic aircraft. Tickets will be available for purchase online through the organization's website and onsite at the show.

About Aviation Roundup
Aviation Roundup is a premier airshow produced by Douglas County and hosted at the Minden-Tahoe Airport in Minden, Nevada. The airshow is a bi-annual event and features excellent airshow performers and military jet demonstration teams. Historically, the Aviation Roundup has hosted both the United States Navy Blue Angles and Air Force Thunderbirds. For more information, visit AviationRoundup.com.