A Different Booklist held a different style book launch Monday night that literally had post rush hour Bathurst St motorists stopping in the road.  The bookstore and cultural centre was holding a sold-out signing and as a result a hundred people sat rigid in their chairs seemingly staring out at one of Toronto’s busiest streets.

A Different Booklist doesn’t have curtains, and its windows run from sidewalk to ceiling.  So, when royalty arrives at the cultural centre, the audience ends up ghosting the cars, the streetcars and pedestrians where Bathurst and Bloor converge.

People stopped and starred back! What they saw was two women sitting in front of a microphone with their back to the street.  The people sitting in the chairs didn’t care about what was going on outside, it was the speakers their eyes were fixed upon.

Royalty indeed had come to Toronto’s multicultural bookstore (specializing in books from the African & Caribbean Diaspora).  Prince Harry and Meghan?  No, but they did figure into the evening event.

This was royalty from the Mandela's New South Africa days.  Nompumelelo 'Mungi' Ngomane ( pictured), the granddaughter of anti-apartheid activist and Noble Peace Prize winner Bishop Desmond Tutu had just arrived from the airport and was talking with a CBC radio host about Ubuntu. 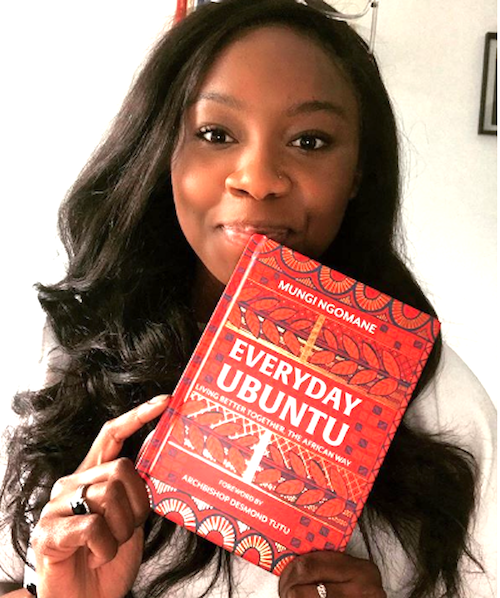 A year in the writing, Mungi’s book Everyday Ubuntu: Living Better Together, the African Way, is now available in Canada. Her hardcover book is an introduction to Ubuntu, the Southern African philosophy that celebrates the universal human bond. It is a personal guide filled with lessons on how to live harmoniously with all people.

After a round of homemade corn soup, Mungi sat down beside CBC radio host (Fresh Air) Nana aba Duncan (pictured at right), to talk about the book, her life and yes, a little bit about Harry and Meghan.

“ Ubuntu is about harmony,” the 27-year author said to Nana aba Duncan. “ It gets you from day to day. Every day is a new day.”

Archbishop Desmond Tutu describes this philosophy as the cornerstone of the new South Africa. ‘’A person is a person through other persons.  In this way we can utilize the philosophical theory of ‘’othering’’ to help explain Ubuntu”.

“ I didn’t want this book to be about my grandfather, I wanted it to be my words,” she told the audience. There are no pictures of the bishop in the book, however, he did write the introduction to the publication’s 14 lessons (there are 14 acts in the South African constitution).

When Prince Harry and Meghan Merkle were in South Africa last September the princess gave a speech that cites Ubuntu.  To a wildly cheering crowd ““I am here with you, and I am here for you and I thank you so much for showing my husband and I the spirit of Ubuntu.”

When the couple met with Desmond Tutu the next day,  the couple was photographed looking at their copy of  Everyday Ubuntu. 'Mungi' Ngomane made a point of telling her Toronto audience that it was her aunt not the Bishop who gave the Royal couple the book.

Fast forward to Monday.  The Washington Post ran a huge story, based on a news item from last week’s UK Daily News that asks if  Ubuntu  “might it have influenced Meghan and Prince Harry’s Megxit?”

Harry and Meghan did get a cheer from the  ticket holders, but, it was Trump who was talked about at length with distain  by Mungi.

As  an American citizen currently based in Atlanta it appears that her concern about the US political scene is her biggest test in following the Ubuntu lesson of respecting  those that you disagree with.

Monday night’s event was  the first fundraiser for  A Different Booklist’s campaign to build a large cultural centre across the street in the construction site that was once Honest Ed’s.

Tips To Leverage Social Media Marketing For Your Business