The Boston Symphony Orchestra, led by Thomas Wilkins, will spotlight electric bass virtuoso Victor Wooten, in the Boston premiere of his La Lección Tres, on a program with works by Coleridge-Taylor and Ellington, October 28–31, at Symphony Hall. Mr. Wooten’s appearance marks the first time an electric bass soloist will be featured in the BSO’s 141-year history of presenting concerts.

"Victor and I have been friends for well over twenty years," said Thomas Wilkins. "This program is unbelievably the first for us actually performing together. Long overdue but how beautiful for me that we get to do so with my BSO family."

"I haven’t been this excited to play music in a long time," said Victor Wooten. "This is a thrill for me." 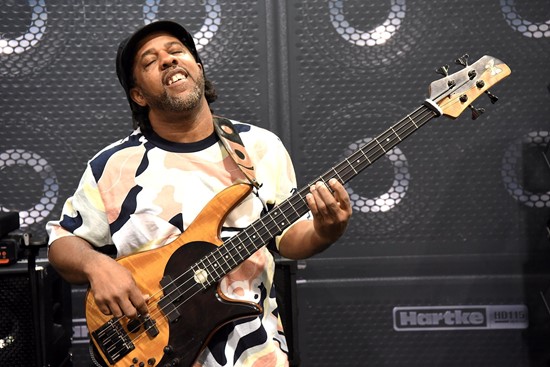 Multi-Grammy winner Victor Wooten makes his BSO debut performing his concerto La Lección Tres, which continues the musical-philosophical journey of his novel The Music Lesson: A Spiritual Search for Growth Through Music. The work was premiered in June 2021 as part of a virtual concert by the Chicago Sinfonietta. These BSO performances of La Lección Tres, under the direction of Thomas Wilkins, mark the premiere of the full orchestral arrangement of the work and its first performances for a live audience. Click here for a brief bio of Victor Wooten; click here for a brief bio of Thomas Wilkins.

Also on this program is a suite from the ballet score Hiawatha by Anglo-African composer Samuel Coleridge-Taylor, drawn from his earlier cantata based on Longfellow’s well-known epic poem. In The River—a symphonic ballet score commissioned in 1970 by the American Ballet Theatre for choreographer Alvin Ailey—Duke Ellington’s music depicting the course of a river from its source to the sea becomes a metaphor for the journey from birth to "the heavenly anticipation of rebirth."

This BSO program with Thomas Wilkins and Victor Wooten also will be featured as a BSO NOW online concert stream available on October 30 as a livestream and November 11–December 11 for video-on-demand viewing through bso.org/now. This season’s BSO NOW offerings will feature the Boston Symphony led by Andris Nelsons and guest conductors and the Boston Pops led by Keith Lockhart, as well as Thomas Wilkins leading both a BSO concert and BSO Youth and Family program, among other special programming. Click here for further details about the 2021–22 BSO NOW online performance series.

Formal BSO titles for conductors referenced in this release: Andris Nelsons is the Ray and Maria Stata BSO Music Director; Thomas Wilkins is the BSO’s Artistic Advisor, Education and Community Engagement, and the Germeshausen Youth and Family Concerts Conductor; and Keith Lockhart is the Julian and Eunice Cohen Boston Pops Conductor.

Ticket Information, Discounted Programs, and the BSO’s Website and Social Media Channels
Tickets for the 2021–22 BSO season, starting at $25, are available for purchase through bso.org or by calling 888-266-1200. Click here for additional ticketing information, including details on the BSO’s discounted ticket programs—the High School and College Cards, $25 tickets for patrons under 40, Rush Tickets, EBT Card to Culture, and Group Sales—as well as access information for patrons with disabilities.

Further details about the BSO’s many activities and ticketing options are available at bso.org. Patrons can also interact with the Boston Symphony Orchestra on Facebook (https://www.facebook.com/bostonsymphony); Twitter (https://twitter.com/BostonSymphony); Instagram (https://www.instagram.com/bostonsymphony/); and LinkedIn (https://linkedin.com/company/boston-symphony-orchestra/mycompany). Links with additional information appear below.

The October 29 concert is the first in this season’s Casual Fridays series; other dates include February 25, March 11, and April 22. Unique to this series, patrons sitting in the Tech Section in the rear of the floor have the opportunity to view the conductor from the orchestra’s perspective on strategically placed screens. All are encouraged to wear casual attire, enjoy a slightly shorter concert with no intermission, and attend a post-concert Casual Conversation with BSO musicians and featured guests.

The October 31 concert featuring Thomas Wilkins leading music by Coleridge-Taylor, Victor Wooten, and Ellington is the first in a new series of three Sunday-afternoon concerts. The remaining dates in the series are January 16 (Andris Nelsons leading music by Julia Adolphe and Beethoven) and February 13 (Philippe Jordan leading music by Borodin, Rachmaninoff, and Prokofiev).

Information about Health and Safety Protocols

The orchestra remains strongly committed to the health and safety of audience members, musicians, and staff. Mask-wearing and proof of either vaccination or a negative COVID-19 test are required for entry to the hall. Updated pandemic protocols at Symphony Hall are available here or at bso.org/safety.