The Trump administration’s recent “Guidelines for Opening Up America Again” ask employers to consider accommodations for seniors and those with underlying health conditions in the wake of the coronavirus crisis. But these workers—who are disproportionately people of color—deserve more than their employers’ considerations; many are actively risking their lives to provide essential goods and services for others. Without ongoing economic support, millions may be unable to take the best actions for the health of both themselves and their communities.

The following analysis underscores the importance of targeted long-term interventions to protect vulnerable workers, providing fresh estimates for the prevalence and uneven distribution of serious health conditions among the working-age population. Among other things, this analysis finds that at least 28 percent of people of color between the ages of 18 and 64—more than 21 million people in total—have a condition that could put them at higher risk of severe illness from COVID-19; it also shows women are more likely than men to have at least one of these conditions. Already, such health disparities, which are a product of structural racism rather than individual choices or behavior, have contributed to stark inequities in COVID-19 outcomes.

Governors or mayors who prematurely roll back social distancing policies, sometimes with public support from the president, will be forcing many at-risk Americans back to work in extremely dangerous environments against their will. Lawmakers should enact measures—such as guaranteed access to paid leave and health care, employment protections, and financial relief—that would allow at-risk Americans to shelter in place for as long as necessary and to safely transition back to work once the threat of COVID-19 passes and stronger occupational safety standards are established. 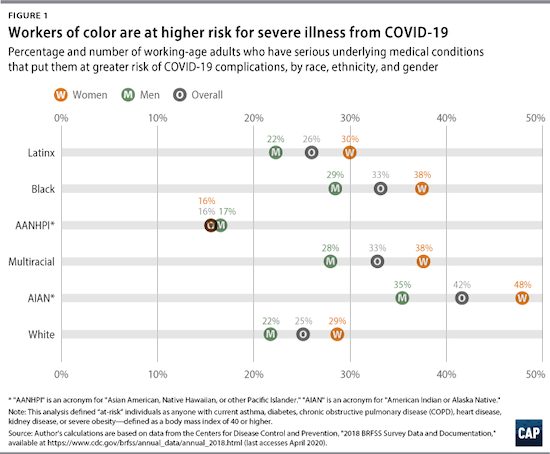 As the chart above demonstrates, Black or African American, Hispanic or Latinx, American Indian or Alaska Native (AIAN), and multiracial adults bear a disproportionate risk of severe illness from COVID-19; and Black, AIAN, and multiracial women are most likely to have at least one serious underlying health condition. These disparities are a result of decades of structural racism—from housing segregation and racially discriminatory zoning decisions to economic exclusion and neglect from public officials. Today, people of color are more likely to reside in food deserts and near pollution-emitting industrial facilities and other environmental hazards that contribute to high rates of asthma, heart disease, diabetes, and other maladies.

Instead of abdicating responsibilities, blaming individual behavior, or forcing at-risk Americans to choose between putting food on the table and staying safe from a deadly disease, lawmakers should dedicate themselves to eliminating health disparities and promoting a robust and equitable recovery for all.

Note: Connor Maxwell is a senior policy analyst for Race and Ethnicity Policy at the Center for American Progress.

The author would like to thank Danyelle Solomon, Emily Gee, and Rasheed Malik for their thoughtful input and contributions to this analysis.

To determine the percentage of working-age adults who have an underlying health condition that puts them at increased risk of COVID-19 complications, the author used the Centers for Disease Control and Prevention (CDC) Behavioral Risk Factor Surveillance System, a nationally representative survey. The analysis used data from 2018 and defined “at-risk” individuals as anyone with current asthma, diabetes, chronic obstructive pulmonary disease (COPD), heart disease, kidney disease, or severe obesity—defined as a body mass index of 40 or higher.

The CDC also considers people who are immunocompromised or who have liver disease at higher risk for severe illness, but these conditions were not included in this analysis due to data limitations. In addition, there are millions of workers over the age of 65 who are considered at-risk, yet they were not included in this analysis of adults aged 18 to 64. Therefore, the estimates produced in this analysis should be considered conservative. Percentages were weighted to reflect population characteristics and controlled to 2018 American Community Survey five-year estimates for more accurate population counts.