What is Happening at the RMPS? MNI Media Writes an Open Letter to the Gentlemen In Charge of the Royal Montserrat Police Service

The question begs, what is happening within the Royal Montserrat Police Service?

The purpose of MNI's open letter to you both today, as the two in charge of the RMPS, is not to offer condemnation; as I am almost certain that the aims of your role are to ensure that the island is served efficiently and appropriately by the Officers that make up the Police Service on Montserrat.

However, MNI is sure you both are aware of recent instances where members of the public have been voicing openly, via social media, their concerns over the treatment they have experienced when interacting with some your Officers.

We know that the call of duty of the RMPS to the community is to serve, first and foremost. This service we also know encompasses the enforcement of the laws and regulations of Montserrat that afford for a safe community and the observance of the rule of law.

Recently, a young man by the name of Trevon Pollard is one of many that shared via social media the following post: 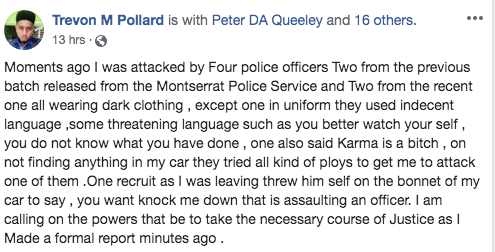 I read with interest under Mr Pollard's post, others citing their grim experiences dealing with your Officers.  It is true that there are both sides to the coin, but is it not unfortunate that the overall messages being portrayed about your Officers is that they are disrespectful to some members of the community, and more so it seems, young people with whom they seemingly take issues with?

It may be only a few guilty of this, but these negative reports are clouding the overall perception of the RMPS.

I took the time to speak one-on-one with Mr Pollard about his post, so as to hear from him personally his encounter. I am always mindful that social media lends to hype and scattered emotions at best, so often fact-checking one-on-one always serves better. The information Mr Pollard relayed was disturbing, and has prompted this open letter to ask you both, with haste, to bring order and trust back into the RMPS.

It is known that factually the RMPS do conduct stop and search on members of the public. You have a job to do and that is understandable.

On the night Mr Pollard was stopped and searched, it is understood that he was informed that he was suspected of having Cannabis (marijuana) in his possession.

However, is it standard practice that RMPS Officers pull over citizens wearing face masks? Are these standard issue gear for your Officers?

Is it also standard issue that your RMPS Officers should be wearing studded gloves that can inflict undue harm whether intentionally or unintentionally on members of the public with whom they come into contact?

Is it acceptable to you both that upon stopping the gentleman that threats were issued to him by members of your Police Service that he should - "watch himself."

Mr Pollard admitted during our talk, that on the Friday night prior to him being stopped, he had a run in with one of your Officers whilst they were off duty, towards which he uttered obscenities to the Officer in question. When stopped on Saturday night that same Officer stated to him in the presence of other Officers who were present; "karma is a bitch."

In any instance, it can be possibly ascertained by the legal minds amongst us that the stop was premeditated and the young man Mr Pollard was targeted.

Mr Pollard has stated during our chat that he is "personally now afraid for his life and well-being" with him being seemingly targeted by some members of the RMPS.

It is further understood that names and identification as to who these Officers were was refused when requested.

Are these occurrences standard practice for Members of the RMPS? More so, two of the Officers present when Mr Pollard was stopped were more Senior than the other two, who were allegedly recent recruits. The two more senior Officers have been confirmed as Officer Orlando Dasent and Officer Sharm Charles. Do they condone that it is acceptable to issue threats and mistreatment to Members of the public when they are stopped?

Many other reports of alleged Police misconduct have come into MNI Media by members of the public who have contacted us privately to share their stories regarding your Officers' interactions. With all the troubling reports of police overstepping their lines and mistreating the public - with both you gentlemen being in charge - you MUST seek to address these issues of mistrust against some of your Offices with haste.

It would appear that some Members of the Royal Montserrat Police Service are treating the public as the enemy, instead of collaborating with the community to maintain order, peace and social harmony.

These reports that are surfacing are a cause for concern. MNI is most certain you will address these in short order and seek to affirm trust in the RMPS.

All Members of the RMPS, many would accept, are not as was outlined in this letter, but those rogue elements must be curtailed as they reflect badly on the organisation overall.