Dr Fergus, who is a well respected Dentist from the island of Montserrat, was present at this conference in the company of International Officers, Councillors, Caribbean Leaders and also the new inductees into the IDC, along with their family and friends who were also present.

Vice Regent Dr Fergus, along with other ICD Members was instrumental in the nomination process of the 17 candidates put forward for Fellowship from the English speaking Caribbean, also known as Region 32.

Most of these candidates who were put forward were from Jamaica; whilst there was a smaller contingent from Antigua & Barbuda, The Bahamas, Barbados and Haiti.

Dentists for Induction into the IDC are nominated by invitation only, which is based primarily on their contribution to Dentistry within their area of influence.

The International College of Dentists (ICD) is known to be a leading international honour society for Dentists. The IDC was conceived in 1920 and has over 11,000 members, also known as Fellows.

Fellowship in the College is granted by invitation only in recognition of outstanding professional achievement, meritorious service and dedication to the continued progress of dentistry for the benefit of humankind."

The IDC illustrates that prior to being recognized as a Fellow, "the candidate’s qualifications and achievements are evaluated by a series of credential committees in order to insure that he or she is deserving of this honour and will live up to the ICD's motto of “Recognizing Service as well as the Opportunity to Serve”.

The Induction of the Candidates during the most recent ceremony in 2018 was presided over by IDC President Clive Ross of New Zealand; Secretary General Jack Hinterman; President Elect Bettie McKaig from the USA and Region 32 Vice Regent Dr Coretta Fergus. 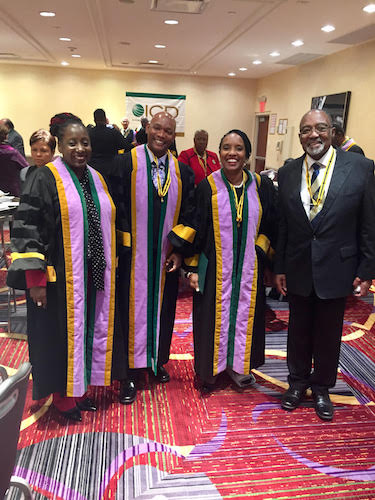 Dr. Joyous Pickstock, of the Bahamas, delivered remarks on behalf of the newly inducted nominees.

Dr. Irvin Mackenzie, Registrar for the Caribbean Section, presented the closing remarks following the Induction. He reminded attendees that they should expect more from the ICD section, telling them that their presence and their work would be felt and seen in the near future.

During the ceremony, current Regent for the Caribbean, Dr. Fenton Ferguson of Jamaica presented the candidates for Induction.