The Ministry of Communications, Works Energy & Labour on Montserrat Announces the Re-opening of The Carr's Bay Bridge

The Ministry of Communications, Works Energy and Labour (MCWEL) on Montserrat have announced the completion and re-opening of the Carr’s Bay Bridge.

The re-opening of the Bridge completes what is being termed as "the first phase of the project which included the construction of a 30’ wide bridge deck with a carriage way for vehicles, pedestrian sidewalk and the protective head walls. The bridge design took into consideration the expected rise in sea level, discharge of storm water from upstream, correction to the Gunn Hill corner, the installation of underground utility ducts and the continuation of the pedestrian sidewalk from the Government Headquarters junction."

According to information coming out of the Ministry, MNI Media understands that the next phase of the Carr's Bay Bridge project is expected to undertake the correction of the Gunn Hill corner "that is adversely chambered with the cross fall sloped in the wrong direction, the construction of drains and the resurfacing of over 300m of roadway." 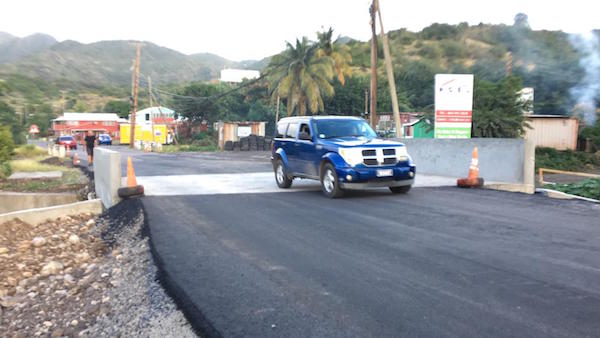 In considering of the logistics for completing the next phase of works in the Carr's Bay Bridge area, and the current state of the Hotmix plant, the Ministry stated that they thought it best to resume the works at the Carr’s Bay road, after the upcoming St. Patrick's celebrations have been completed due to the expected increase in traffic volume around this time.

The next phase of the project is slated to involve the temporary closure of the Carr’s Bay road and the re-routing of the traffic through the recently upgraded Barzey’s Road. This will allow for safety of motorists, pedestrians and workers.

For the next phase, it is understood that The Ministry’s technicians are currently looking at ways in which they can expedite the works in order to minimize the amount of time needed for the temporary closure of the main road.

The public is asked therefore to adhere to all traffic control measures that will be in place during the further construction works that will take place.