Democratic presidential hopeful Kamala Harris sat with Spanish Network Television Telemundo’s Anchor Julio Vaqueiro for an exclusive one-on-one interview. They talked about the possible impeachment of President Trump, the increase of tariffs to Mexican products and immigration policy, among other issues of interest to the Latino community. Highlights of the interview aired have been shared with MNI Media and are presented below:

“This President continues to push forward what I call the Trump trade tax. This is about taxing American consumers. People are going to have to pay more for washing machines, pay more for clothing, pay more for shampoo. When we look at the trade policy he is conducting in terms of China, now with Mexico, it’s going to result in people here paying billions of dollars more a year for consumer products.”

“It is also part about an ongoing policy by this administration and Trump to vilify immigrants and to not deal with the real issue; which is that we cannot continue to have policy that is about vilifying people and rejecting those who are fleeing harm. We are creating human rights abuses in the way that this occurring, and it has to stop”

“There may be strategic reasons not to begin an impeachment proceeding, which is that the President may use this as a rallying cry, as he has done before, to say this is a witch hunt and people are trying to get me, and he will confuse…he will try to confuse voters about what it really is. And the reality is also that the House will do its process, but then it has to go over to the Senate for a vote. And it is very unlikely that this Senate, which is run by Republicans, will vote to actually impeach, and convict the President on impeachment charges. And, so what would end up happening at the end of that process? What ends up happening is that he then runs around and says: see, they tried to get me, and they couldn’t get me. Which would be inaccurate, because for political reasons there won’t be a conviction. But I am of the mind that… yes, so that could create a strength for him in terms of the election… But I am of the mind that we have to fight for the integrity of the checks and balances of our system. When any one in government abuses its power, it has to be checked and balanced. In this case, the Mueller report made very clear that this President and his administration engaged in obstruction of justice. There should be a consequence for that. I believe very strongly that we have to listen to what I think Mueller was telling us, when he said the only reason he did not indict, it’s because there was a memo that says that you can’t indict a sitting President through the special council, through the department of justice. But I think that he also said that the congress can do something. So, if we are going to have checks and balances what we need to do is to let government to do its thing and begins impeachment proceedings.” 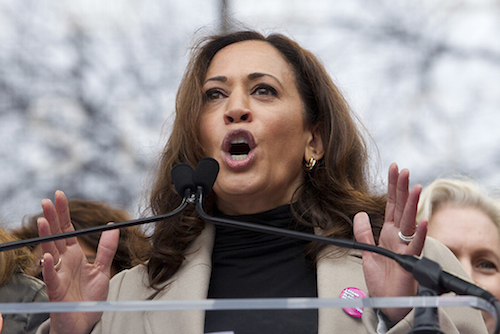 “We have eleven million people who, the vast majority are working hard, paying their bills, children are in college, serving in the military, working in Fortune 500 companies, but we have not addressed the fundamental point which is that we have to have comprehensive immigration reform and a pathway toward citizenship for the people who are here.”

“One, we need to have a policy that is not about putting people in cages in private detention centers. Two, giving them and putting in the resources to have the staff there to process these cases and to listen to their stories and determine who deserves asylum... But we cannot have a process that is about turning our back on them and criminalizing people by putting them in cages when they haven fleeing harm and seeking refuge.”

“I would immediately end the funding of these private detention facilities which are profiting of the detentions of other human beings and are creating conditions that are unlivable and immoral for the people who are in those detention facilities. We recently had six children who have died in custody and that has to end.”

The International Podcast SE2: EP12: Beauty Classes in Africa’s Largest Slum Getting Women Out of Poverty